The primary objective of Arma: Reforger is simple – to deliver a deeper shooter experience. It’s also a long-awaited beachhead for a new phase in Bohemia Interactive’s long-running series. Through this creative platform, players and modders can scout ahead for an early look at the future of Arma 4.

Arma: Reforger is an all-out visual assault thanks to its new proprietary engine. Called Enfusion, it’s being used to modernize the Milsim genre drastically. More specifically, it’s recreating – and drastically updating – the one that started the love affair for many: 2001’s Operation Flashpoint: Cold War Crisis.

Getting Boots on the Ground

Here’s a refresher on Operation Flashpoint – in basic terms, Everon is an idyllic island getaway, with a landmass of roughly 51km2, with an overall area of 164km2. There are many points of interest, including villages inspired by the former state of Czechoslovakia and the occasional French heritage structure.

Activities abound on the island. There are plenty of opportunities for the more adventurous to pick up a weapon and engage in tactical, squad-heavy shooting with significant vehicle elements. Light reconnaissance and sabotage behind enemy lines are also on the cards.

Paradise to Die For

Returning guests will note Everon has undergone significant change since their last trip. The island is now replete with bubbling rivers, lakes, and ponds. While undeniably picturesque, these waterways provide tactical challenges, especially for vehicles, which are better suited to the low-rolling hills and patchwork fields. Outdoor types will find themselves drawn to the dense forests and mountaintops, which offer abundant photo and sniping opportunities.

The lush and varied terrain is supported by an impressive draw distance. Taken collectively, these improvements leave little doubt that Arma: Reforger has been upgraded for the modern age.

Time to Pick Your LZ

In terms of playable content, there are two modes. These can vary between large-scale military conflicts spread across huge areas or more close-quartered brawls. The opening salvo is Conflict — a Team Deathmatch scenario, where communication is key. Expect to be evicting the enemy from their positions, building bases and ticking off a variety of other tasks. Performance on the battlefield is rewarded with commendations and increasing rank.

The second mode is Game Master—a real-time scenario editor. Think of it as a dynamic sandbox, where one or more players effectively becomes a Dungeons & Dragons DM. From an eye in the sky, one can weave responsive combat encounters for the grunts in the mud and the blood. The potential for thoughtfully curated combat — or hilarious chaos — is huge.

From Playing God to Forging Mods

Last, but by no means least, are the mods. Players looking to tweak the standard offerings can jump into the Workshop to grab add-ons created by fellow enthusiasts. The Enfusion engine shines here, providing a comprehensive toolbox that allows modders to remake almost everything in the game, using existing or custom-built assets, mechanics and more.

Get Oscar Mike with Arma: Reforger, and you’ll be in for a AAA experience. Curator creativity, player-evolved content and that unique, intoxicating Milsim challenge are king. Arma: Reforger is available in early access for PC or on Xbox Series X|S. 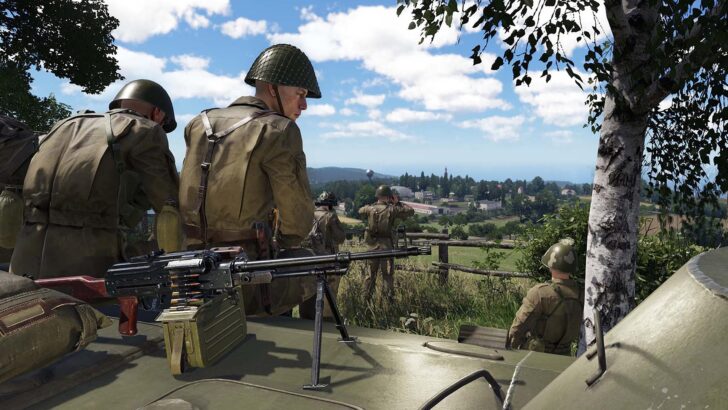