The majesty of AIC 2022 awaits all Arena of Valor players, fans, and the gaming industry

Together with Garena, Level Infinite has announced the results of the Arena of Valor International Championships (AIC) 2022 Group Stage draw, pitting the fiercest competitors in the region against each other in a bid to claim the glory of one of AoV’s most prominent international tournaments.

16 top teams from across 10 regions will battle it out at the virtual AIC arena, with the new theme – New Rivals, New Honor – emblematic of the growing popularity and competitiveness within the global AoV community.

From June 16 to 19, fans will enjoy a dynamic viewing experience while teams utilize the best strategy and skills to climb the championship ladder. The Group Stage is made up of the following four groups:

AIC 2022 is the perfect stage to showcase the grit and tenacity of all teams involved as they vie for a total prize pool of US$2,000,000, the highest prize total to date for the championships. The emerging champions will walk away with US$700,000, with more bonuses being doled out to outstanding individual performances and more.

The AIC 2022 Group Stage is split into two phases, with all matches taking place in a single round-robin format.

Matches will be played in the Best-of-1 format, with the top 3 teams of each group advancing to phase 2.

The second phase will then be played in a Best-of-2 format, with the top team of each group headed to the playoffs. A 2-0 result will earn the winning team 3 points, with no points awarded to the losing team, while tying 1-1 will reward each team with 1 point.

Global ban pick rules will be enforced to ensure the integrity of the competition throughout both phases. Once the results are determined, AIC 2022 will move into the latter stages.

At this stage, the top four teams of each group in the Group Stage will be separated and matched up against four other teams with the second-highest points total from the Group Stage.

The draw will be made randomly, and matches in the quarter-final stage will be played in a double-elimination format. Any team that loses will drop to the loser bracket, with another chance at redemption up for grabs.ㅤ

Teams which make it to the semi-finals stage will do battle in Best-of-7 format matches, with the top two teams making it to the showpiece event on July 10 to compete for the overall AIC title.

AoV fans and players can catch AIC 2022 on various streaming platforms. All livestreams will be enhanced further by local commentary in different languages to provide additional insights for viewers.

Arena of Valor is available to download on the iOS App Store and the Google Play Store. 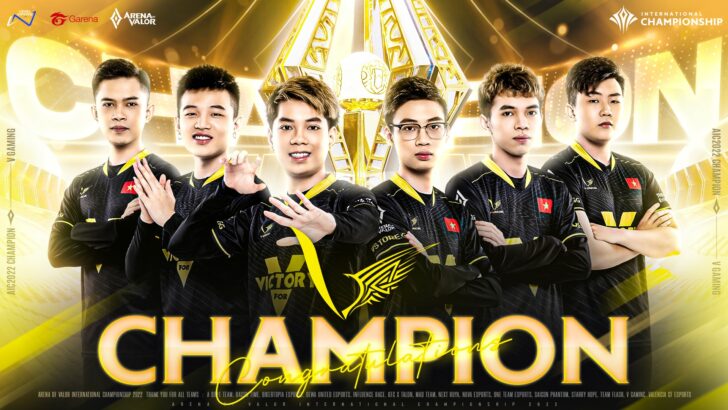